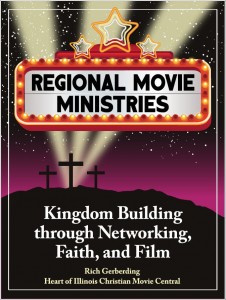 In 2009, our ministry (Men of AIM) co-sponsored “The Secrets of Jonathan Sperry” to play in Peoria.  It did very well.   A few months later, another film lasted just two weeks.

As my son and I sat in a nearly empty theater, we realized the importance of getting the word out about Christian films (we can be more specific than just ‘faith-based’).   That afternoon started the “Heart of Illinois Christian Movie Central” with the mission of:

Those efforts have continued, and grown with each year.

Through the feedback we have received from those involved in the industry, we decided to encourage others to replicate our efforts – not in a “franchise” way, but simply by sharing our experience and doing what we can to help.

We don’t claim to have all the answers, but we know The One who does.  Any success we have had is through answered prayers.

For those who have been following this ministry for some time, you know it has taken far longer than expected, but the booklet is NOW AVAILABLE!

You can order your copies here. (If in the Peoria area we also plan to have copies available).

Are you interested in trying something in your area?
Sign up for our Regional Movie Ministry e-newsletter here.

We won’t flood your mailbox, but will share new groups who are starting, and include notes of encouragement for our collective efforts.

What will it look like in 10 years?  Who knows – we certainly don’t!   But we wouldn’t trade what God has done with this ministry over the past decade for anything I would have guessed!

Our efforts here in the Heart of Illinois will continue, but our networking to promote Christian films in our region is a separate population than this effort to network among organizations promoting Christian films, so we decided to not confuse the two on one web page.

**unfortunately due massive spamming comments
have been turned off.**

or email Rich (at) RichGerberding.com

Did you read to the end of the book?
Want the resources to help you track your contacts and potential network?